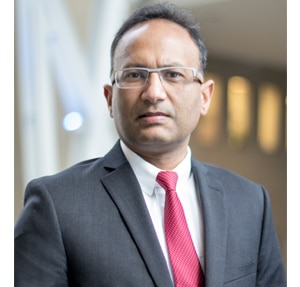 The Canadian Association of Radiologists (CAR) is pleased to present the 2018 CAR Distinguished Career Achievement Award to Dr. Mayank Goyal for his outstanding contributions to clinical research in acute stroke triage, diagnosis and endovascular therapy.

Dr. Mayank Goyal personifies excellence in academic radiology, demonstrating leadership through hard work, dedication and innovation. His collaborations with stroke neurologists, interventional neurosurgeons and acute care physicians have led to the design and execution of multiple randomized, multicenter clinical trials in acute stroke research: ESCAPE and SWIFT PRIME (both published in NEJM). He was also the core-lab for the REVASCAT trial (published in NEJM), and  the Co-PI of a CIHR-funded study called PROVE IT.

The ESCAPE Trial stands as one of the most significant trials of its kind evaluating endovascular treatment (EVT) with mechanical thrombectomy in large artery occlusion. The trial demonstrated a remarkable treatment benefit for EVT in reducing disability and demonstrating a reduction in stroke mortality. Partway through the trial, the data were so overwhelming that the trial was stopped early because randomizing patients to the control arm would have been unethical in the face of such a strongly positive endovascular treatment arm. The establishment of endovascular treatment in acute stroke through his leadership is a discovery that will change the lives of individuals and families forever worldwide.

Dr. Goyal also pioneered multiphase CT angiography, an imaging technique in acute stroke that was implemented globally as part of the ESCAPE study, and subsequently became the basis for the PROVE IT study, which consists of a head-to-head comparison between multiphase CTA and CT perfusion. Initial results and feedback published in Radiology suggest that the technique is extremely useful and saves on average 20 minutes in acute stroke treatment.

The global impact and collaborative spirit at the heart of Dr. Goyal’s research is further evidenced in his role as the lead organizer/researcher of the HERMES collaboration, which has brought together 7 randomized trials evaluating endovascular treatment from 7 countries. Dr. Goyal has spearheaded an environment of trust and cooperation among trialists that has allowed for pooling of patient level clinical data and central adjudication of all imaging data (over 5000 CT or MRI studies). Research from the HERMES collaboration has been published in JAMA and the Lancet, with more publications forthcoming.

Closer to home, Dr. Goyal is the chair of the Calgary Stroke Program 5T course (Teamwork, Technique, Transport, Technology and Training) that emphasizes their multi-modal approach to acute stroke assessment and treatment. He and his colleagues have published extensively on the importance of a coordinated, streamlined approach to the acute stroke patient, likely an important factor that differentiated the successful ESCAPE Trial from previous trials that failed to demonstrate the benefit of endovascular therapy.

Dr. Goyal’s excellence as a scientist, diagnostic and interventional neuroradiologist have increased the international profile of Canadian radiology research. In addition to his record as a researcher, teacher, and mentor he is recognized as an outstanding clinician with exceptional interventional neuroradiology skill and expertise, often noted to have perhaps the fastest puncture to clot retrieval time among his peers.

In light of his achievements, demonstrated impact on stroke care around the world, and contributions to Canadian radiology research, the Canadian Association of Radiologists is incredibly honoured to present Dr. Mayank Goyal with this award.