MENUMENU
You are here: Home / News / CARJ Editorial Team and CAR Member in the Running for the 2022 Minnies Competition

The CAR Journal and a CAR member are in the running for some major recognition at the 2022 Minnies – Aunt Minnie’s annual awards for the “best and brightest in medical imaging.”

This year, Dr. Kate Hanneman from the University of Toronto is a semi-finalist in the Most Influential Radiology Researcher category, and a CARJ study entitled Influences of the Social Media Continuum Model in Radiology: Theory and Reality is a semi-finalist for the Scientific Paper of the Year. 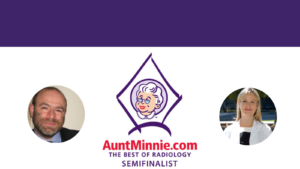 Dr. Hanneman says she was caught off guard by the nomination.

“This was a surprise and feels quite surreal as I did not expect to be nominated, let alone a semi-finalist. I found out from a Twitter post that someone tagged me in.”

Dr. Hanneman says she has several different areas of interest in the field of radiology research.

“​My research program focuses on the role of cardiac MRI and PET/MRI in improving diagnosis and risk stratification/prognostication of non-ischemic cardiomyopathies and myocarditis. I also love radiology education – I mentor and supervise several fellows in radiology research.” Dr. Hanneman adds that she is also very interested in the role of social media platforms in sharing research and radiology education, particularly on Twitter.

The awards are highly competitive, with more than 200 candidates vying for recognition across 14 categories, so having multiple submissions up for awards in a single year is a significant accomplishment.

Dr. Michael Patlas is Editor-in-Chief at the CARJ and says he is extremely proud of the nomination.

“Our team is feeling so honored to be short-listed by Aunt Minnie alongside some of the best radiology scientists in the world. It reflects an increasing recognition of the quality of work published by the CARJ and the tremendous growth in its impact.”

He says the article being considered by Aunt Minnie is highly relevant in our increasingly digitized social world.

“Social media has an important role in sharing the knowledge and reaching multiple colleagues. It also has a vital role in communication with non-physician stakeholders. There is a positive association between social media attention and citation rates as per prior work from our team.”

While the competition has not concluded, Dr. Patlas notes that winning would have major benefits for the Journal like attracting more top-notch submissions.

Finalists will be selected by an expert panel compiled by Aunt Minnie after two rounds of voting and announced soon, with final winners chosen in October.

Congratulations to Dr. Hanneman and the CARJ editorial team!